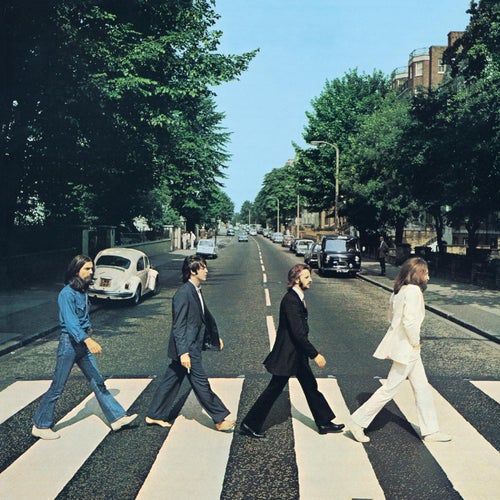 A key element of Abbey Road is the quality of the band’s harmonies. There are comic backing vocals in the cautionary tale of “Maxwell’s Silver Hammer” and delicate choral work in “Sun King,” but the most impressive example is on “Because,” where John, Paul and George’s vocals were recorded three times to create a choir of nine voices. The album’s opener demonstrates The Beatles’ great talent for arranging songs did not necessarily mean it would lead to something elaborate. Adopting the principle of less is more, the combination of space with a tight performance creates the funky feel of “Come Together.” John’s singing provides a rock master class in controlled tension, energy, and commitment on the single and again on “I Want You (She’s So Heavy),” which brought the album’s first side to an astounding climax. Former Guns N’ Roses guitarist Slash described it as a “huge influence as far as where I come from as a musician. The guitar melody on that is so perfect.” Inspired by the whoops and hollers of rock ‘n’ roll hero Little Richard, Paul’s impressive rock vocal gymnastics can be heard in “Oh! Darling.”

George’s compositions on Abbey Road showed his writing at a creative peak. “Something” became one of the most covered songs in The Beatles' catalog. His uplifting “Here Comes the Sun” featured the newly invented Moog synthesizer and it was one of the first times it was used on a pop album. Ringo’s “Octopus’s Garden” was a sparkling surprise among the variety of styles on Side 1. However, the character of Abbey Road is dominated by what was referred to as “The Long One” on Side 2. Starting with “You Never Give Me Your Money,” a medley of eight titles flowed together until “The End,” with a concluding couplet that gained more significance once it was clear the album contained The Beatles’ last recordings.

Since its release, Abbey Road has continued to grow in stature. The sheen of George Martin’s production and the group’s immaculate performances make it tempting to think they pulled out all the stops for their last musical statement. But that is just speculation. They might have continued to record, but The Beatles stopped at the end of the decade they had helped to define. Yet Let It Be, made in January 1969, was waiting in the wings.
Kevin Howlett