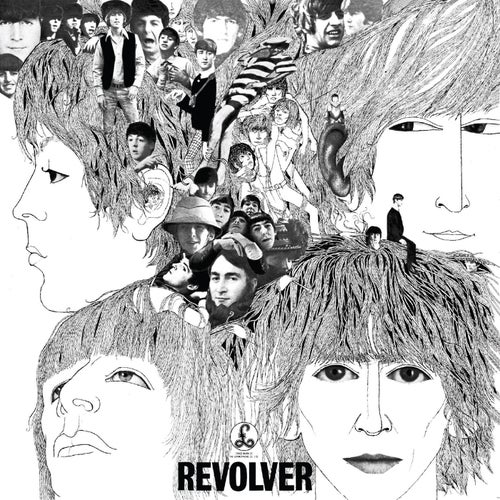 Auf Napster abspielen
Veröffentlicht: Aug 1966
Label: Emi Catalogue
In 1966, The Beatles’ world tilted on its axis. Their previous album, Rubber Soul, had marked a turning point in their approach to studio work, and they focused on creating something even more revolutionary when they returned to Abbey Road on April 6,1966. After 300 hours of sessions, Revolver stands as a towering artistic achievement.

Throughout the album, an astonishing variety of moods are conveyed in Lennon/McCartney’s songs, ranging from the feel-good bounce of “Good Day Sunshine” to the scary paranoia of “She Said She Said.” Revolver’s two ballads have contrasting emotions: “Here, There and Everywhere” is joyful, with an uncluttered arrangement distinguished by exquisite harmonies, while the melancholic narrative “For No One” unfolds over a backing track with a classical mood, heightened by rhythmic clavichord accompaniment and a French horn solo. Revolver also contained the most song contributions from George Harrison to date. His caustic “Taxman” opens the album and “Love You To” reflects his growing fascination with Indian music. “I Want to Tell You” is a more straightforward rocker but, as with his other two songs, has unconventional lyrics.

During the first session, The Beatles began recording “Tomorrow Never Knows.” The track introduced a number of the new sonic ideas used throughout Revolver, including innovative techniques to record drums, a much more prominent bass guitar sound, electric guitar tracks played back on reversed tape and special vocal sounds. With other musicians, such studio effects might have sounded gimmicky and, before too long, quaintly old-fashioned. But The Beatles and George Martin always applied an unerring sense of taste while they experimented, ensuring the unusual sounds enhanced the songs. Homemade tape loops on “Tomorrow Never Knows” create an ethereal atmosphere that matches the spirit of the song, and the “backward” electric guitar on “I’m Only Sleeping” has a yawning quality that compliments the dreamy lyrics and languorous performance. A variety of effects on “Yellow Submarine” amplify the track’s childish fun. Unlike anything else, “Eleanor Rigby” is a solemn masterpiece. With little of the electronic manipulation heard elsewhere, it was a bold idea to use only a double string quartet score as accompaniment that made the song sound stark and radical. These were adventurous times.
Kevin Howlett