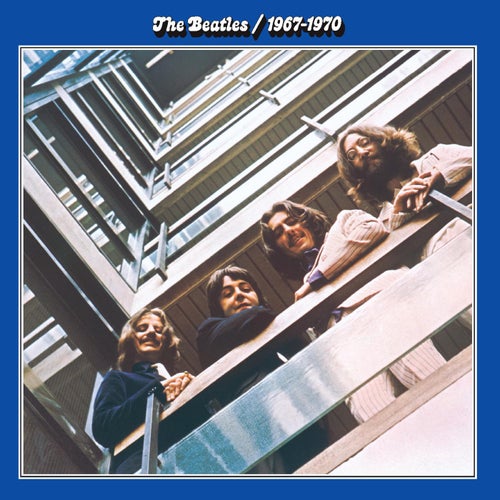 Auf Napster abspielen
Veröffentlicht: Apr 1973
Label: Emi Catalogue
In April 1973, three years after The Beatles announced they were breaking up, two compilation albums were released. Called 1962-1966 and 1967-1970, each became known by the color of the album’s artwork. Just as their 1968 double LP was called “The White Album,” the 1973 collections were dubbed the “Red” and “Blue” albums. Together, they included the 26 A-sides of The Beatles’ U.K. singles and 27 catalog tracks.

The 1967-1970 album includes 11 hit songs plus a track that was not released as a U.K. single, “The Long and Winding Road,” which became The Beatles’ 20th and final U.S. No. 1. It is remarkable that so many of the classic songs featured on the album -- “With a Little Help From My Friends,” “A Day in the Life,” “While My Guitar Gently Weeps,” “Here Comes the Sun,” “Across the Universe” -- were never released as singles.

The tracks on the “Blue” album were recorded after The Beatles had decided to stop performing live. The hysteria surrounding their tours had made their concerts musically frustrating and frequently dangerous. After August 1966, The Beatles focused all their energy on songwriting and recording. The first disc released in this phase of their career was the double A-side “Strawberry Fields Forever”/”Penny Lane.” Its arrival in February 1967 showed the extent of The Beatles’ ambitions in sonic experimentation. “They didn’t just write songs, they wrote records,” producer T Bone Burnett said. “That was a first, I think. Nobody had done that before.”

The group’s adventurous work with producer George Martin sounded revolutionary when they were first released. Groundbreaking art and mainstream popularity do not often converge, but did so in 1967 with the critical and commercial success of Sgt. Pepper’s Lonely Hearts Club Band. What The Beatles created in the studio changed everything. “Everything that we take for granted, they absolutely invented it. It’s because you have the best band of all time with the best producer of all time,” producer Mark Ronson said. And producer Rick Rubin concurred: “It’s the reference point for everything. It’s the bar that’s set so high that you can never reach it. But thank God it’s there, because we all strive [to].”
Kevin Howlett