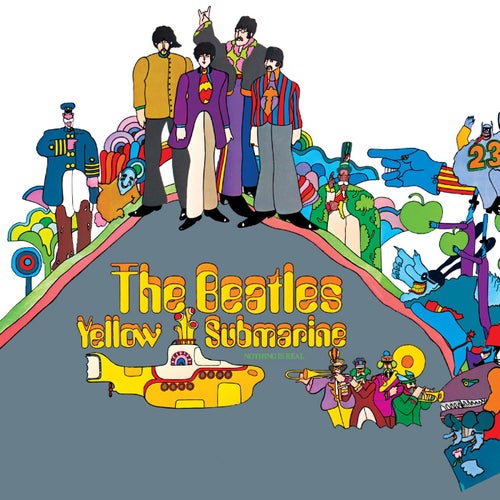 Auf Napster abspielen
Veröffentlicht: Jan 1969
Label: Emi Catalogue
The Beatles released their 10th album in January 1969, exactly six months after the Yellow Submarine movie premiere in London. One side of the soundtrack album was devoted to six Beatles tracks; the other featured a new recording of the film’s orchestral score composed by producer George Martin. Clearly, the title song had to be included, so “Yellow Submarine,” a No. 1 single from 1966, opens the album. The record also featured “All You Need Is Love” from 1967, which was, as Paul McCartney saw it, “basically the message of the movie.”

The remaining tracks were previously unreleased songs first heard in the film. Two were written by George Harrison: “It’s Only a Northern Song” from the Sgt. Pepper sessions (it had been replaced by his song “Within You Without You”) and “It’s All Too Much,” recorded on May 25, 1967, a week before Sgt. Pepper was released. It was around that time The Beatles signed up to provide songs for the movie and the sing-a-long catchiness of “All Together Now” proved perfect for the finale of Yellow Submarine. As John Lennon recalled, during the latter part of the film’s production “they wanted another song so I knocked off ‘Hey Bulldog.’ It’s a good-sounding record that means nothing.” (A typical Lennon understatement.) This outstanding example of how hard The Beatles could rock together was recorded, overdubbed and mixed in a single 10-hour session on February 11, 1968.

Directed by George Dunning, the innovative animation of Yellow Submarine evoked the psychedelic spirit of Sgt. Pepper to show the triumph of love over evil. As George observed: “That film works for every generation -- every baby, three or four years old, goes through Yellow Submarine.” It’s an apt illustration of how easily children fall under the spell of The Beatles’ music -- a melodic force more powerful than all the sour Blue Meanies of the world.
Kevin Howlett